As mentioned last week, grasses in Namibia seldom have the chance to recover from grazing in summer until seed-set. In commercial farming areas, grazing animals come back too soon before the grazed grass has recovered adequately because farmers look at the wrong type of grass as an indication of when seed-set has occurred.

According to Dr Axel Rothauge, founder and consultant of AgriConsult Namibia and former agriculture lecturer at the University of Namibia (Neudamm campus), producers often watch widespread and noticeable sub-climax species like “krulblaar” (Eragrostis rigidior) or silky bushman grass (Stipagrostis uniplumis) for signs of seeding. In fact, these grasses are so inedible they are hardly ever eaten during the growing season and thus nearly always flower.

Since “their grasses are always flowering”, commercial farmers think they can bring back their animals. However, the really edible grass species were grazed down to ground level and have not yet recovered when the animals return.

In most communal farming areas, grazing livestock never leaves and the edible grasses are always re-grazed, irrespective of their growth stage. 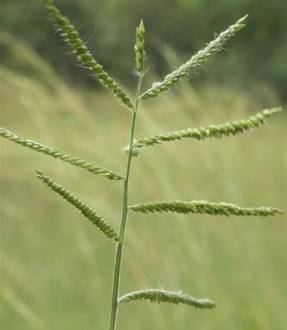 How long will it take until the better climax grasses die out if grazed in such a manner?

In communal areas where animals never leave a grazing commonage, the better grass species die within 3 to 5 years, unless there is plenty of rain. On commercial farms, the speed to death depends on grazing pressure. With fewer animals on the farm, edible grass species generally live longer than when there are many animals on the farm, Rothauge says.

Unfortunately, this system is not a solution either as half the farm is grazed with the full farm's livestock (i.e. it is stocked double) and is grazed intensively. It is just a matter of (low) rainfall before it too will break down, bringing about hopelessness for many farmers in the process.

Firstly, identify the perennial grass species that grow well in your area, are dependable and that you can farm with (“indicator” grasses).

Secondly, during the upcoming rainy season, make sure these indicator grasses recover to seed-set before the area in which they occur (camp or commonage) is grazed again, Rothauge adds.

This truly adaptive management can be achieved in numerous ways that do not involve rigid grazing calendars (or planning).

Ways to achieve adequate resting of edible perennial grasses will be discussed next time.