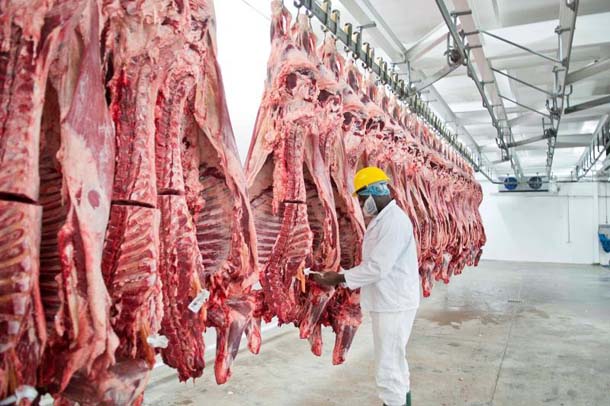 After some months of rotational slaughter, both Meatco’s Windhoek and Okahandja abattoirs have resumed slaughter and factory operations are progressing smoothly.

Meatco’s Windhoek Plant Manager, Andries Taljaardt, says while slaughter continues uninterrupted, system upgrades are currently being effected at our Windhoek abattoir to improve the effectiveness of operations and maximise output in order to cater to growing customer demands.

“Because of the demands of the customers and the fact that preferences and specifications are continuously changing, we have to move into the direction which the market is moving. We have installed a new data system and layout in our Windhoek abattoir deboning department which allows for a lot of value addition to our products. The new system controls the volumes and all the information on the deboning floor and is responsible for the production recons and the labelling of products,” he said.

Implementation of this new system started in April this year.

Andries says the deboning floor of our Windhoek abattoir has also been expanded with the new layout. In the past, the Windhoek abattoir could only pass a maximum of 360 carcasses through deboning per day and had only one vacuum and one frozen line.

Beef destined for European markets are required to be deboned. It always takes a bit longer to debone carcasses than to slaughter them, so increasing deboning capacity will mean we can increase the amount of product we will be able to put into European markets to get superior returns for Namibian producers.

The new highly technological system is sourced from overseas and according to Andries, is used in all international abattoirs that adhere to European Union standards. Meatco is a pioneer in quality standards compliance in Namibia and is one of the first companies to achieve certification for international standards like ISO 9001 and HACCP.

“We had to appoint six additional people since implementing the system so there’s job creation within the department as well,” said Andries.

He adds that the new system will soon be rolled-out to the rest of the abattoir departments before it is installed at our Okahandja plant.