On 4 February 2021, Meatco hosted the first Night School Class of the year through the Agriculture, Extension and Advisory Services Division.

Topics Sales Representative at SWAVET (Pty) Ltd Namibia, who has been with the animal pharmaceutical company for the past six years, Paul van der Merwe, discussed were most common diseases after the rainy season, vaccines that are a preventative measure to rear cattle, treatments thereof, types of parasites, the importance of phosphate licks as well as how and with what wounds in cattle should be treated.

Van der Merwe warned that during the rainy season diseases occur in animals and that they must be handled sooner than later.

One of the most common diseases is Lumpy Skin Disease (LSD), a disease spread by blood-sucking insects. LSD causes high fever in animals, and expecting animals can end up aborting or dying of secondary infections. There is no cure for LSD, but antibiotics fight secondary infections.

Van der Merwe urged producers to vaccinate animals against LSD annually around November and December or as early as October, which is usually six weeks before the start of the rainy season. Two millilitres per animal is the prescribed dosage and should be injected subcutaneously (under the skin), he said. He stressed that if an animal is showing clinical signs of the disease, it must be isolated immediately because it is highly infectious and can transmit the disease to other animals.  He advised them to treat secondary infections with any oxytetracycline and Vitamin B complex used to boost the animals’ immune system.

Another common disease during this season is Bovine Ephemeral Fever, also referred to as Three-Day Stiff Sickness, caused by an insect-borne virus, Van der Merwe noted. Clinical signs are short fever, shivering, lameness, muscle stiffness and, on rare occasions, can also lead to death. Causes loss of milk production and reproduction difficulties. It is spread by flies, midges and mosquitos. It can spread in the herd through the saliva of infected animals and nasal discharge. The farmers can only treat the disease with an anti-inflammatory and calcium. To boost the immune system, farmers can use Vitamin B (metabolic) to boost immune systems. There is only one product available on the market from Onderstepoort (B-Phemeral) and the vaccine is safe for expecting and lactating animals and should be given annually during winter, Van der Merwe said. Animals can be vaccinated from six months onwards, while follow-ups should be administered four weeks later. Dosage should be 2ml per animal, which have a 21-day withdrawal period, and producers need to maintain the cold chain storage between 2-8 degrees for both LSD and the Three-Day Stiffness Sickness.

He further enlightened the producers on Actinomyces pyogenes (Corynebacterium), a disease caused by a bacterium primarily in cattle, sheep, goats, and occasionally in other animals. The discharge from a wound is highly infectious, therefore, it should be treated as soon as possible because the bacteria can stay in the soil for many years. Its clinical sign includes a lump on the jaw of the animal, which is the biggest difference between the clinical signs of LSD and that of Actinomyces pyogenes. Producers should isolate the infected animal from the herd. Treat it with antibiotics, oxytetracycline or penicillin prescribed by a vet. Cut the wound open, drain the discharge into a plastic bag and burn it afterwards to eliminate any further infections, and flush saltwater or povidone on the wound or even insert a pessary tablet to kill the bacteria. He said the vaccine used is B-Phemeral from “Onderstepoort”. He encouraged the producers only to vaccinate healthy animals against this disease. Animals older than six months take a dosage of 10ml and less than six months take 5ml in dosage.

The class also covered parasites common in animals. Parasites kill a farmer’s income and profits, Van der Merwe added. They cause weight loss, low reproduction and increase the mortality rate in animals. Wireworms are a type of parasite, which is bloodsucking and drains the red blood cells in animals. Other parasites are the tapeworm and fluke, which are all internal parasites. They are treated over a four to six weeks interval or as needed with the active ingredient called Levamisole and Rafoxanide. Animals must be treated on an empty stomach. External parasites are ticks, flies and midges and they cause blood loss, suppress appetite, cysts, causes amputation of the ears in severe cases and irritate the animals.

Van der Merwe also enlightened the farmers on the various treatments of specific internal and external parasites and the importance of cleaning wounds. He advised producers to keep wounds clean and dry with wound oil or spray and use phosphate that is the most important mineral used for the distribution of nutrients in the body. Phosphate optimises the usage of rich green pastures and increases reproduction, boosts the immune system, and helps with the absorption of vitamins.

The class was an engaging session where farmers could post questions to the presenter as he deliberated on the various topics of discussion.

Meatco’s Extension and Advisory Services Division will host more sessions on various relevant topics soon. Producers should follow our social media platforms for the dates, venues or towns where the classes will be held. 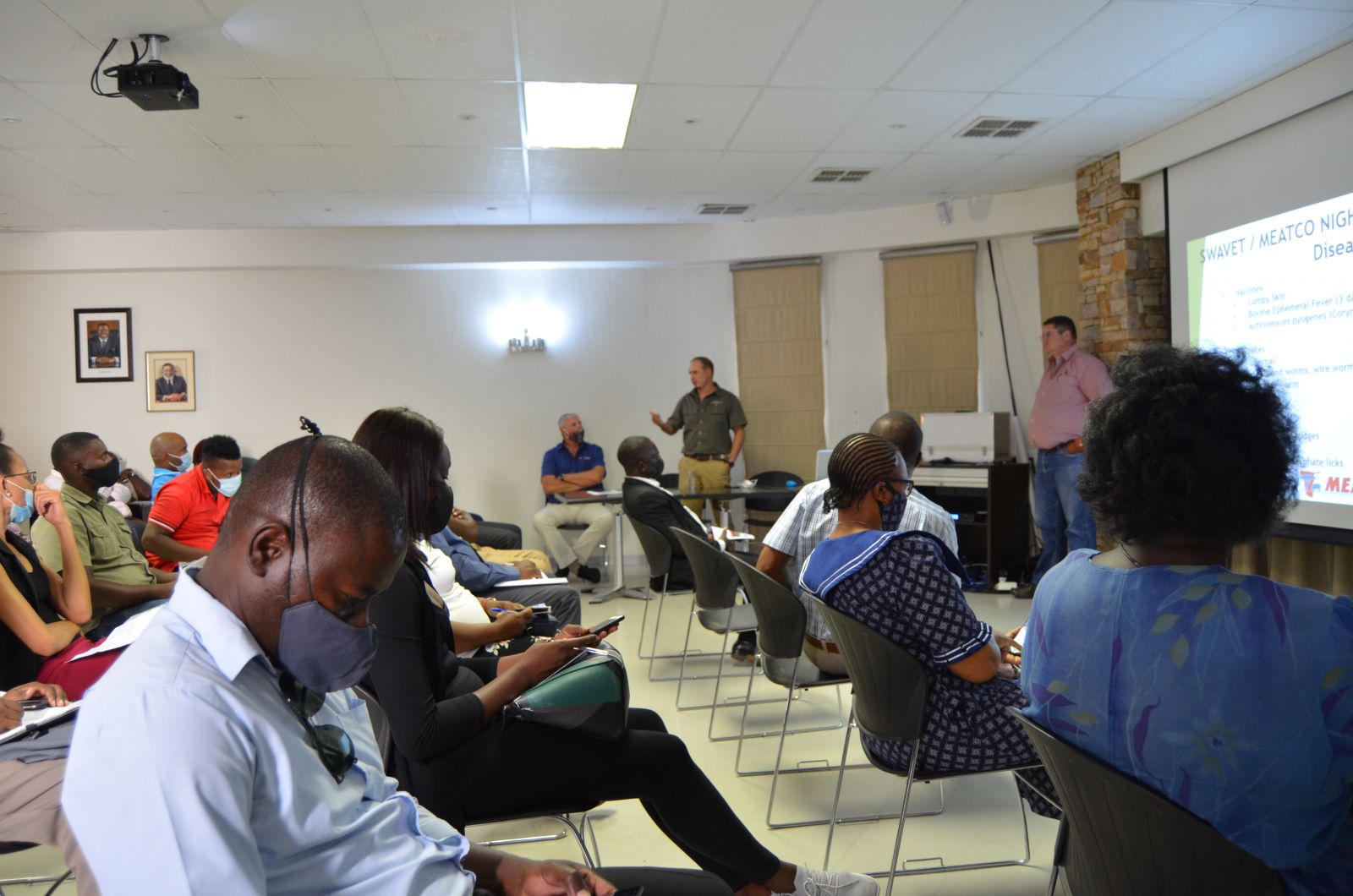