In most parts of Namibia, February 2017 has been a good rainfall month. The drought has been eased in all areas except the far North-Western parts of the country. How to manage your grazing after the drought depends on the rangeland's condition before the drought struck.

If you are one of the lucky farmers whose farm had strong perennial grass before the drought, more than 80% of those grass clusters should still be alive now. Camps can be grazed hard for 10 to 14 days and then rested until the perennial grass starts seeding in about 50 to 80 days' time, depending on rainfall in March and April 2017. 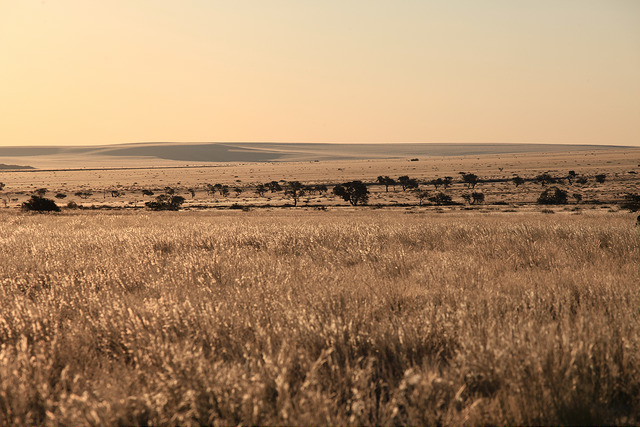 According to Dr Axel Rothauge, founder and consultant of AgriConsult Namibia and former agriculture lecturer at the University of Namibia (Neudamm campus), you can maintain pastures perennially while managing your grazing for high livestock production, rapid animal growth, higher fertility amongst females and less need of licks, especially costly protein-energy licks. This is payback for keeping rangeland in good condition: high forage availability with high nutritive value that supports good animal production at little expense.

If your farm had few or weak perennial grasses before the drought, chances are they did not survive. Your grass pasture will be annual now. It will have high yields while it rains and good quality before it seeds. Once annual grasses seed (about now), nutritive value plummets, animal condition weakens, milk production declines, fertility drops and animal growth slows. Unless you support animal production with licks, especially high protein-energy “production licks” in the summer, animal production will lower despite higher input costs, which is the result of failing to maintain a grass sward in good, perennial condition.

If your farm had only annual grasses for years before the drought, the grass pasture will be annual in perpetuity. For the short month of February, livestock were in paradise. Annual grasses were still young and plentiful, thanks to good rains falling in short succession.

“In hot and dry December and January, there was no grass as there was too little rain for the heat we experienced. From March onwards, annual grasses will seed and their nutritive value will plummet. The demand for expensive, quality licks rises accordingly,” Rothauge says.

How does one graze an annual grass pasture?

“Keep it short, prevent the grasses from maturing and seeding to conserve their nutritive value, make hay early (in March) from underutilised camps before annual grasses mature and buy additional hay. Build a fodder bank for when the rains cease, because then annual growth stops too,” he says.

If the rains come late next season, or fail, you will need that hay. But it will be ridiculously expensive then, so rather buy now and invest the “opportunity savings” in a decent, covered hay shed. The man-made drought with its associated crisis management, high lick costs and purchase of additional fodder will be with you for as long as your grass sward is annual. Bankruptcy is not inevitable, but keeping afloat will be a struggle.

Short times of boom followed by long periods of bust. Sound familiar? The only way to escape this vicious cycle that has you dancing on the edge of farming failure is to convert your farm's grass sward from annual to perennial. This will take a lifetime and success is not guaranteed. Improving rangeland condition is tricky and has many interacting variables.

Careful thinning of encroacher bush while keeping the ground well covered, restricting rainwater run-off, sowing-in seeds of perennial grasses that cannot be bought anywhere and changing to adaptive rotational grazing are all part of the answer.

“But one drought can wipe out the progress of several good years. So start early and stay the course. Your current predicament should convince you that there is no alternative to rangeland improvement,” concludes Rothauge.