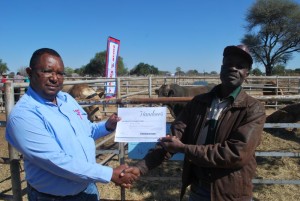 The handover took place at Okakarara. The bull breeds consist of six Simbras, five Brahamans, a Simentaler and a Braunvieh.

The beneficiaries were selected from communal areas like Otjohorongo and Otjimbingwe in the Erongo Region, Grootberg in the Kunene Region, Okamatapati, Ovitoto and Okakarara in the Otjozondjupa Region, and Otjinene in the Omaheke Region.

The allocations are aimed at helping farmers whose livelihood depends mainly on farming, to improve the genetics of their herd in respect of reproductive capacity and suitability for slaughter.

According to Vehaka Tjimune, Meatco’s Executive for Policy Innovation, Stakeholder Relations and Corporate Affairs, the bulls were donated by the Meatco Foundation, with support from the network organisation Danish Coop.

Vehaka adds that at the end of the day, Meatco wants to make sure the quality of cattle produced in the communal areas continues to improve.

The bulls were selected based on criteria that looked at their temperament, age and adaptability to the environment.

At the handover, producers expressed their appreciation of the bulls, saying they will help improve the genetics of their cattle and will enable them to market good quality cattle to Meatco in future, thereby improving their livelihoods.

Meatco’s technical staff SVCF will be involved in the implementation of this programme and will ensure the bulls are well fed and kept healthy, says Kingsley Kwenani, the Executive Officer for the Meatco Foundation.

He says that a monitoring system has also been put in place to track the bulls’ progress. The beneficiaries will also receive training to provide them with knowledge so that they are able to understand livestock production from a commercial sector perspective point of view.

The project started last year and will run until 2015, with the total funding estimated at N$7.5 million over a period of three years.

“I can’t think of any other scheme where communal farmers SVCF benefitted from a bull scheme, except in instances where they had to buy the bulls at a subsidised price, as per the Government Bulls Scheme. In our case, the bulls are paid for 100 per cent by the Meatco Foundation and supporting partners. The communal producers don’t pay for anything and this is why this gesture is such a great one,” Vehaka said.

The beneficiaries were selected from the ranks of Meatco producers, meaning they are all producers who have been signing contracts and delivering cattle to Meatco for slaughter.

“All the beneficiaries already have a track record with Meatco and that is why we thought it would be good to allocate these bulls to people who are connected to our business, in order to improve on what they are already doing,” said Vehaka.

The Meatco Foundation was established by the Meat Corporation of Namibia in April 2011 and it is governed by a Board of Trustees.