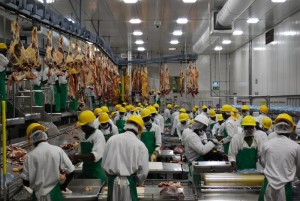 Meatco once again finds itself in a very unique position where immediate strategic planning and decisions had to be made. Farmers are cueing up to market their cattle through Meatco. We therefore had to create extra capacity to accommodate the high demand for slaughter.

In July 2013, Meatco decided to operate on a rotational basis because of the decline in cattle numbers. It was thus decided that we only operate one abattoir South of the Veterinary Cordon Fence (SVCF) on a four month rotational basis. In other words, Windhoek factory would operate for four months after which it will be closed for slaughter, and Okahandja Factory would operate for the following four months until December 2014.

However, cattle numbers have unexpectedly increased and exceeded the initial cattle numbers that was initially budgeted for the period April – August  2014. This is because of the increase of the Norwegian Quota, the current high exchange rate which led to a significant increase in Meatco producer prices. The latter and the open borders for beef imports resulted in more cattle numbers being offered to Meatco. Meatco therefore had to cut short the period for the rotational planning.

Both the Windhoek and Okahandja factories will be in operation from 22 April 2014. We are also able to once again provide jobs to approximately 200 people on a fixed term basis for five months. As promised last year, if we get back to high cattle numbers in future and upscale our numbers, previously employed Meatco fixed term employees will be given an opportunity to be the first to apply for these vacant positions. Therefore, they will be the first to be considered when contracts are signed for the next five months.

With this operational decision Meatco anticipates to get at least another 16 000 cattle through the factories for the next five months.

Influential factors that enabled Meatco to be in this distinctive position:

Government relaxed the border for beef imports: On a strategic level Meatco has considered the benefits that this decision would have on the industry, our business and the country. The decision was recently made by government to allow beef imports from other countries once again. This decision had a significant impact on our business, because we now have the opportunity to market our product into more lucrative markets, where we get better returns and improve the prices paid to producers. The local market can now decide to import their beef products from other countries and not necessarily procure it from Namibian farmers. The local market usually buys for the cheapest price in order to sell it at a reasonable price to consumers.

The Norway quota and the exchange rate benefit: Another factor which we did not include in our planning for this year was the Norway Quota. Meatco received an additional 400 tons earlier this year that we may export to Norway. The combination of the Norway quota and the value that we are able to generate from the favourable exchange rate puts Meatco in a position to be able to afford and sustain high producer prices. At the moment Meatco’s price is very competitive and many producers who have slaughter stock prefer to market to Meatco.

Although we pursued a more equitable distribution of the Norway quota and hoped that the borders would be opened for beef imports, we could not determine when these factors would fall into place. We therefore had to do our planning according to the facts we were certain of. A trend of declining cattle numbers after previous drought years was observed. We therefore anticipated that cattle numbers would remain low for the rest of 2014 as farmers will work on rebuilding and restocking their herds. We were positive about the Norway quota and the relaxation of the border, but we were not certain when and if it was going to happen, because the Namibian government had the final say. We also did not know that the exchange rate would increase to such an extent and remain constant at a peak.

Although we have initiatives in place to increase cattle volumes, the positive changes in the business environment have allowed us to reach some of our increased cattle volume goals earlier than expected and for the next five months we are able to provide jobs to 200 fixed term employees at Meatco. Operating on sound commercial business principles has allowed us the flexibility to amend our strategy and operations according to the situation that we find ourselves in and to capitalize on it.

The government played a major role. From Meatco’s side we informed them what the impact on our business would be if these factors would be in place, but the decisions remained up to them. We are therefore privileged and thankful that these issues were addressed.

To accommodate our producers, we made plans to take in as many cattle as possible. Producers are thus welcome to contact our procurement department if you want to market your cattle through Meatco.

Slaughter at Windhoek will start on 3 April 2014. From 3 April 2014 to 21 April 2014, the Okahandja factory will be closed. This will be the last period for the next five months that Okahandja employees will travel from Okahandja to Windhoek. During this time Okahandja will be under maintenance. This period will give us time to recruit the fixed term employees, run their medical examinations and give them the necessary training.

Windhoek – In Windhoek we need at least 506 people to operate the factory for slaughter.  We currently have 300 permanent factory employees at Meatco which means that we have to appoint additional +-206 employees on a fixed term contract basis for the five month period. Windhoek will be fully functional with the capacity to slaughter 560 cattle per day from 22 April 2013.

Employees will be appointed on a five month fixed-term contract basis from April 2014 to the end of August 2014. In case cattle numbers continue to increase beyond August we have the flexibility to extend the contracts on a monthly basis depending on what cattle numbers look like, but if it does not increase the fixed term contracts will not be renewed. Jobs that are available in the different departments: Abattoir cattle, White and Red offal, Deboning, Despatch, Hides and skins, by-products and effluent plant.