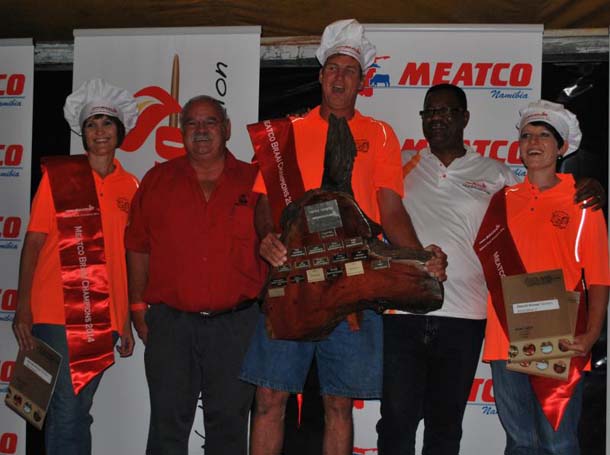 The Hochfeld Farmers Association is the 2014 winner of the Meatco National Braai Competition.

In the Social Teams category, the first place winners are the ‘City Sleekers’, followed by the ‘Voermeester’ in second place and the ‘Hippies’ in third place.

As this year’s champions, the Hochfeld Farmers Association not only gets the honour of hosting the next year’s National Braai Competition, they also received N$100 000 from Meatco to do it with. The winners of the social team category received a cash prize of N$10 000.

This year’s competition also included a Junior Braai category, a first in the history of the competition. This category was won by Rume Kotze and Diane De Lange.

The National Braai Competition has been part of the farming community for more than 30 years and Meatco has had the privilege of being involved for more than 20 years.

“I am humbled to think that as an organisation, our involvement in the farming community spans generations, but not just with the national braai. Meatco has been around since 1980’s, and has also been working with farmers for more than 30 years,” Martha Namundjebo-Tilahun, the Chairperson of the Meatco Board of Directors said at the event.

Tilahun outlined that a lot of things have changed over the last 30 years which includes Meatco’s business environment, the agriculture industry and Namibia as a country.

“But one thing that remains the same is our vision which is to act in the best interest of Meatco producers and the Namibian meat industry. This fundamental principle guides all our decisions and all our actions,” she said.

Tilahun further pointed out that while Meatco cannot guarantee that in future it will be involved in the competition in the same manner that it is today, the Corporation can guarantee its commitment to Namibia’s meat industry.

The braai competition takes on a “ready, steady, cook” format, where the main ingredients are only revealed on the day. The theme for 2014 was “Vuur jou naam” which translates ‘Fire up your name”.