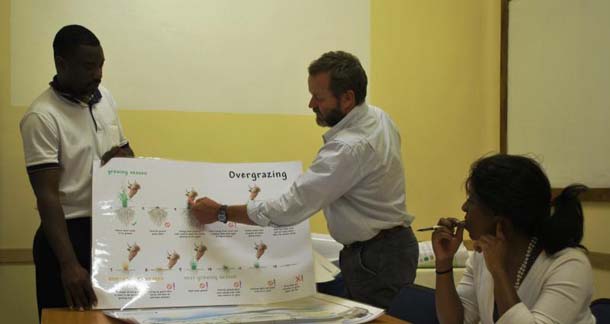 The Meatco Foundation is the organisation’s corporate social investment vehicle with the main objective being to promote and to support the improvement of socio-economic conditions in the rural livestock sector. The foundation does this through developmental interventions by finding and using donor funds.

Together with Meatco, the Ministry of Agriculture Water and Forestry, the Ministry of Lands and Resettlement, Agricultural Unions and other partners, the foundation works towards implementing a coordinated program of support to the livestock sector.

With its latest undertaking, “Sustainable Cattle Production in Namibia”, the Meatco Foundation has joined forces with the network organisation Solidaridad and Danish Coop as donors, and the IRDNC to implement and manage the project.

Solidaridad provides 50% of the funding, while the remaining funds come from Danish Coop (FDB), GPS and Meatco. Intended for farmers in the Kavango, Oshikoto, Omusati and Kunene regions, the project began in May last year, was implemented in August, and will run until October 2015.

The project is specifically aimed at farmers in the northern areas where there is a great deal of poverty. Most of the local population is dependent on natural resources, which includes livestock. Unfortunately the cattle population per square kilometre and the cattle/human ratio is indicative of overstocking and overpopulation.

Around 61% of the NCA is communal land which falls under the leadership of Traditional Authorities and is occupied by subsistence farmers. As its rangelands degrade, the already impoverished residents are becoming increasingly vulnerable to drought and climate change. Active interventions are needed to shift towards more resilient land and natural resource use. However, commercialising cattle for slaughter and treating the pasture as a managed resource, requires a shift in traditional tribal practices and mind-set.

The project seeks to enable 2 400 smallholder communal farmers to sustainably manage their livestock while making them commercially viable. Unfortunately the herds are generally in a poor condition, under-commercialised and used as status symbols, as financial insurance and a source of food. Since farmers face difficulties in gaining access to markets, this hinders market-oriented production. However, market participation has shown to change the asset and insurance function of the animals.

Through the project, the foundation has the opportunity to improve cattle genetics, overall animal condition and reproductive health. This is important since the potential is there to commercialise bigger volumes of improved animals for slaughter. At the same time communal pasture can be repaired, sustained and reclaimed through movable corrals, herding techniques and selective grazing. The betterment of cattle genetics will also lead to better volumes and quality of beef from the cattle, generating higher prices for the farmer.

The Meatco Foundation anticipates that this will in turn lead to an improved livelihood.

The project will reach out to around 800 farmers each year, encouraging each of them to produce four or five extra cattle for slaughter. The total amount of additional cattle procured will be about 4 000 a year, which amounts to roughly N$12 million derived from cattle sales. So, three years down the line, the total benefit will amount to more or less N$36 million in additional revenue that has flowed into the area.

We expect the increased income will give farmers a disposable income, with this money being used to reduce food insecurity and to send children to school. In this way we hope to contribute towards a reduction in poverty.

When the project comes to an end, Meatco will continue with activities to promote sustainability.