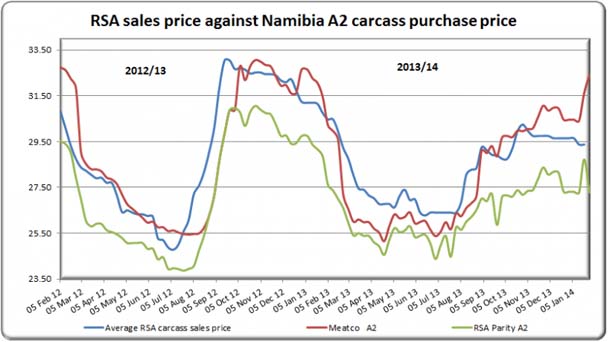 Meatco has increased its average producer price with N$3,62 per kilogram on 27 January 2014, a massive jump from the previous week and one of the biggest weekly increases in the company’s history. This follows an increase of N$1,03 during the previous week.

The price jump was made possible by the increased Norway quota which was allocated to Meatco and the prospect of increased returns from this market. It follows a decision by Cabinet recently to allocate the Norway quota on a more proportional basis, subject to a predetermined set of requirements. The result was 1 200 tons of the 1 600 ton quota being allocated to Meatco. In total this has allowed Meatco to increased its average producer price by N$4,65 per kilogram.

The benefit of this price increase also extends to all producers, including those in the Northern Communal Areas. This is because of Meatco’s policy of paying the same producer prices, subject to the quality of animals, north and south of the Veterinary Cordon Fence.

The biggest price increases were affected for B- and C-grade animals (N$4,35 and N$4,96 respectively over the week of the 20th alone), which is the category where the majority of slaughter ox produced in Namibia fall.