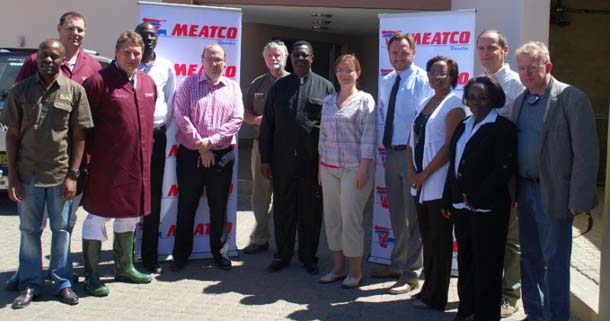 A delegation of members from the European Union (EU) Parliament visited Meatco today. The delegation was given a tour of Meatco’s world class Windhoek Abattoir and a presentation of how the Meatco business operates.

The visit by the delegation comes amidst advanced negotiations with regards to the Economic Partnership Agreement (EPA) between the EU and Southern African Development Community (SADC) countries (of which Namibia is a member).

In his remarks to the delegation, Meatco Chief Executive Officer, Vekuii Rukoro, appealed to the EU policy makers not to lose sight of the tremendous good brought to Namibia through the preferential market access which Namibia currently enjoys, when conducting their EPA negotiations.

“Preferential access to the European markets has a significant positive effect on the Namibian economy. It helps to improve the livelihoods of the majority of Namibians, especially previously disadvantaged Namibians. Consider the disastrous impact it would have if the negotiations are not successfully concluded,” Vekuii said.

Nearly 70% of Namibians are either directly or indirectly dependant on Agriculture, with the majority dependent on livestock and cattle farming in particular.

At Meatco, the volume of product traded with the EU, the United Kingdom and Norway accounts for 30% of the product sold, but amounts to more than 50% of Meatco’s revenue. Vekuii noted that at the moment, there are no other markets where Meatco can get these types of returns.

Meatco is also in the unique position of operating a ‘cooperative like’ structure despite having no legal owners. As such, the income that Meatco generates is channeled right back into the Namibian producer’s pockets in terms of the price Meatco pays for their cattle, while retaining only the minimum to run  operations and upgrade facilities.

“This means that the price we pay, or are able to pay because of our preferential market access to the EU, directly benefits all producers on the ground. This benefit extends to all producers, including those in the Northern Communal Areas (NCA), weaner producers and those producers who do not deliver to Meatco, but rather to non-export abattoirs. The reason for this is because we set the benchmark for cattle prices in Namibia,” he said.

In the last financial year, more than 63% of Meatco’s turnover went directly to Namibian farmers, with aims to increase that number to 70% in the near future.

In his remarks, Vekuii also raised the issue of the implementation of the EU regulation 206/2010 for export, specifically the 40-day-rule, which is applicable to countries where there is regular movement of animals between different veterinary zones.

In Namibia, movement of cattle from a zone with lower veterinary status to a green zone is not permissible by law, and prohibited by a physical barrier. This means that all animals in the green zone are effectively healthy animals and the 40-day regulation is not applicable to the Namibian situation. But despite this, Namibia is required to comply with this regulation.

“The negative impact of the enforcement of the 40-day-rule has been significant, especially on our communal producers who are struggling to comply with this regulation. We understand that the 40-day regulation applies to all importing countries, but ask that the EU at least discriminate positively to the advantage of those countries who do not allow cattle movement between zones,” said Vekuii.