First Permit Day South of the VCF a success 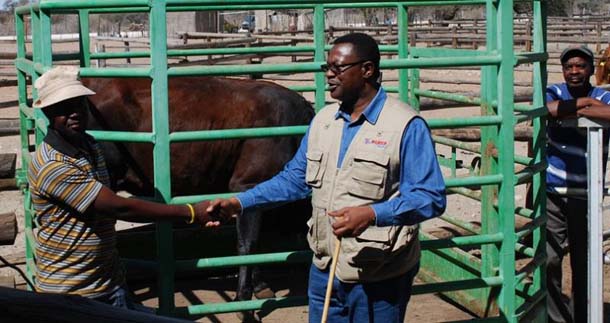 Meatco, in collaboration with the Orutumbu Farmers Association procured a total of 36 cattle from the first ever Permit/Assembly Day held south of the Veterinary Cordon Fence (VCF) at Ongongoro this week.

The event, which has been described by both Meatco and the Orutumbu Farmers Association as a “success” was held at the Ongongoro kraals on Tuesday, 13 August 2013. Ongongoro is situated in the Okatjoruu area of the Otjozondjupa region, approximately 70 km from Grootfontein.

The purpose of the Permit Day was for Meatco to reach out to farmers, specifically communal and emerging farmers with the aim of buying cattle from them at one central point.

In addition, the event was held in line with Meatco’s quest to empower previously disadvantaged farmers by facilitating their mainstreaming into the Corporation’s formal marketing stream, therefore bringing its market closer to producers in the communal areas.

Meatco Chief Executive Officer (CEO), Vekuii Rukoro, who attended the event said there are a lot of cattle in the communal areas and that through events such as the Permit Day, the Corporation is making an extra effort to be active in these areas.

In his welcoming remarks, Chief Kaveru of the Orutumbu Farmers Association expressed his gratitude towards farmers for the high number of cattle they brought for marketing at the Permit Day.

Mutjavikua said he remains hopeful that the association’s partnership with Meatco will go a long way in addressing the needs of communal farmers by linking them to the Meatco market.

Communal Producers marketing to Meatco in the past have been hampered by distances, lack of transport, resources and infrastructure, as well as a lack of understanding of the processes of selling to Meatco.

“This is our way of reaching out. With the permit day, we wanted to bring the business closer to the communal and emerging producers, to reduce the barriers to entry and make it easy for them to sell their cattle to Meatco,” Rukoro said.

With the Permit Day, Meatco also wanted to create a platform to engage with farmers in Ongongoro and surrounding areas.

“Ultimately, the Corporation was looking at building and maintaining long and mutually beneficial business relations with these farmers. This is our first Permit Day south of the VCF, but our intention from here on is to expand to all communal areas,” Rukoro said.

Rukoro further made a strong call to communal farmers to market their cattle directly to Meatco, and in so doing become Meatco members, especially in anticipation of the Meatco ownership debate that is currently going on.

Some of the farmers who sold their cattle at the event expressed happiness with the price paid by Meatco for such cattle, with many saying that the price paid by the Corporation was almost double than the price they get when selling to other markets.

Meatco already has events of this nature in the Northern Communal Areas (NCA) for quite some time now and the success of the Ongongoro permit day might just have paved the way for more similar events south of the VCF.